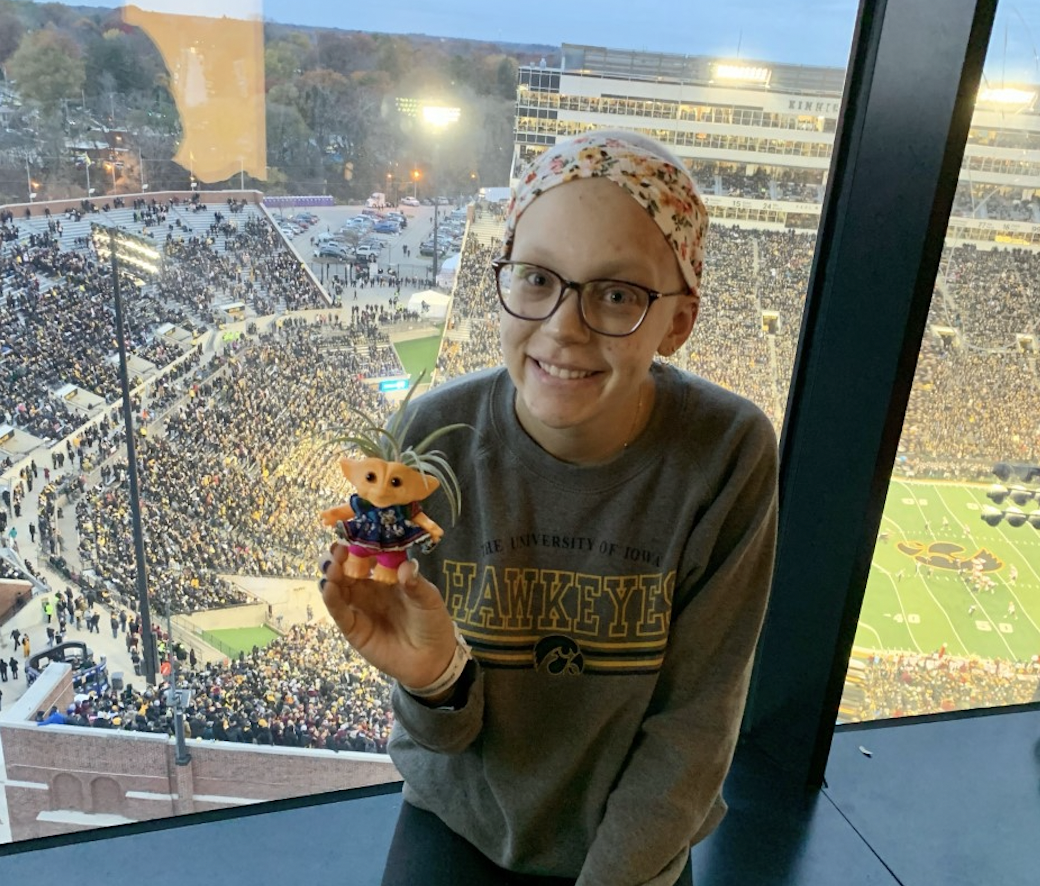 Natalie was diagnosed with Acute Myeloid Leukemia (AML) on June 24, 2021.

An unusual bump that appeared on Natalie’s forehead led her to her an appointment with her pediatrician. Other than the physical sign of the bump, Natalie did not have any symptoms of illness.

Natalie was busy enjoying the summer following her sophomore year of high school. She was working part-time at a local coffee shop, training with her high school Cross Country team for the fall season and spending time with her friends enjoying all the sun and fun that summer has to offer.
We presumed Natalie had form of cellulitis on her forehead and labs were drawn to determine if this infection should be treated with antibiotics or antiviral medications. A CT was done to be sure nothing was overlooked. The CT showed nothing more than “soft tissue swelling”.

We were relieved and were waiting for the lab work to come back the next morning.
A few hours later, our lives were completely turned upside down. We were told we needed to pack a bag for a couple days and to go directly to the 11th floor of the Children’s hospital in Iowa City.

We were to get there as quickly, and safely as possible….they would be expecting us. We had NO IDEA that we were heading to the pediatric oncology unit….or that we would spend 205 days there, or the next 8 months of our lives at an inpatient level of care. That mysterious bump was later diagnosed as “Sweets Syndrome” and while it caused her to lose sight from both eyes for several weeks, it was ultimately what saved her life. The results from the lab work her pediatrician ordered provided early detection of her rapidly progressing AML.

Following her diagnosis, further testing determined that she had a high-risk genetic mutation that would require four rounds of aggressive chemotherapy treatments; a bone marrow transplant; and long term oral chemotherapy to prevent relapse following her transplant. Her first three rounds of chemotherapy required month long hospitalizations and only a few days at home before she was readmitted for the next round. The fourth round presented several life threatening complications for Natalie.

Her cell counts did not recover following the treatment. She was neutropenic for several months, she developed a series of bacterial and fungal infections, she had a reaction to blood transfusion, developed pneumonia, and suffered a lung collapse requiring emergency surgery to place a chest tube. As a result of all the medications to treat these complications, her liver and kidney levels were at dangerous levels and transplant had to be delayed, five times. Her vital organs were not well enough to withstand the conditioning required prior to transplant and the transplant itself. With each delay, she was on borrowed time against her leukemia coming out of remission and going into relapse. If that had occurred, transplant would have been off the table, and no further treatments were available for her disease.

In January 2022, we took a leap of faith and moved forward with transplant. After 3 months in the hospital, most of this time in isolation, her emotional health also became a priority. Natalie’s faith was strong, her optimism and confidence in herself and the medical team caring for her never waivered.

Natalie was finally well enough to go home on February 18, 2022 after 115 days inpatient. Those days included Halloween, Thanksgiving, Christmas, her 17th birthday, New Years and Valentine’s Day. She also missed the first semester of her Junior year. Because of the stringent COVID restrictions that were in place, Natalie and her mom missed spending these holidays with family. Instead they were with their newly found hospital friends, that became like family to them.

Now that Natalie is well enough and has been discharged from the hospital, she will be required to remain in isolation for several months as her immune system matures and her body recovers from all that she has been through. Natalie’s room will be a place that she can retreat to for rest, as well as a quiet space to continue her educational goals of completing her Junior year of high school with her class.

Natalie is extremely grateful for the team at My Happy Place for bringing this bedroom makeover to her. She looks forward to paying forward the love and generosity that she has received from everyone that has supported her during this devastating time in her young life.