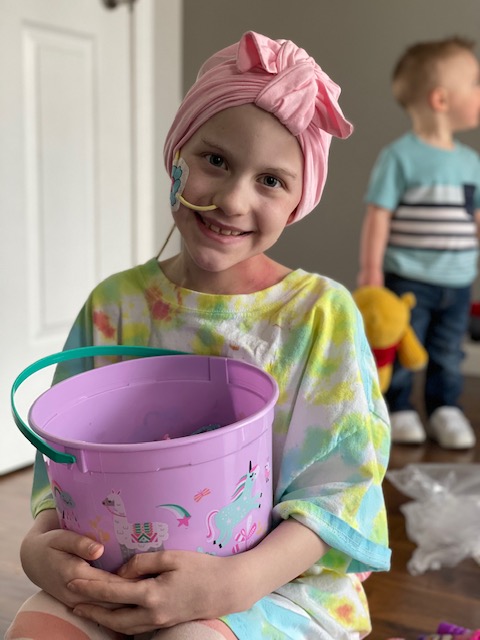 Most people never meet their hero, I gave birth to mine. Meet Our Warrior Princess, Gracelyn Jo!

Our life will forever be split in two, before November 14, 2020 and what came after. Gracelyn woke up with a severely painful headache and non-stop vomiting (after battling nausea, vomiting, and headaches for 5 weeks on and off.) We knew this was something serious and it couldn’t wait any longer for a primary doctor to find the answer. We rushed her to the local ER. After a CT image was taken, within minutes we received the news Gracelyn had a large mass in her head.

Gracelyn was transported to the University of Iowa’s Stead Family Children’s Hospital. After further imaging, it was concluded that she had a 6 cm mass on the left side of her brain near her temporal lobe, a 7 mm midline shift where her left brain was smashing into her right brain, and massive swelling which was causing so much pressure she was at risk to seize at any moment.

Two days later, she underwent a 10-hour craniotomy to remove the tumor. Five days after that on November 20, 2020, our phone rang and we heard the words no parent should ever have to hear spoken on the other end, “IT’S CANCER”.

Gracelyn’s official diagnosis is Ewing’s Sarcoma. This is an aggressive solid bone/soft tissue tumor. It represents 1% of all childhood cancers. Just like her favorite animal, Gracelyn is a unicorn. Why is she a unicorn you ask? Because she is 1 of only 3 Ewing’s Sarcomas to have started in the mastoid bone (bone behind the ear). EVER. WORLDWIDE. It just doesn’t happen. Unfortunately, the tumor also spread to the lymph nodes in her neck as well. Gracelyn underwent 14 rounds of intense chemotherapy (every 2-3 weeks) at the University of Iowa Stead Family Children’s Hospital and 30 rounds of proton radiation therapy at Mayo Clinic in Rochester, MN.
For almost a year our family of four was split in half. Gracelyn and I living in a hospital fighting for her to have a tomorrow. Marty (dad) and Jackson (younger brother) trying to maintain normalcy at home and at work. The journey of watching your child fight for their life is a special kind of hell. It is physical, mental, and emotional torture. There were moments I thought we would break, but our love and faith provided the strength we needed to achieve remission. Gracelyn has been in remission for six months and can be deemed cancer free after five years of clear scans (every three months) due to the chance of relapse with this type of cancer.

None of us are the same people that started this journey. Cancer changes you in ways that are impossible to put into words. We all carry the emotional scars, but Gracelyn has the burden of carrying both the emotional and physical reminders which have greatly reduced her self-esteem and increased her anxiety and anger. I think having a space that will not only be her own but look and feel like everything she enjoys will help her immensely—her new room can be her oasis, a safe space where she can decompress, a physical representation of her being understood. I know this space will bring a smile to her face and joy to her heart every single day when she walks in.

Gracelyn is all things girly and a self-proclaimed “fashionista”. Just like her cancer, she is a unicorn and she embraces it with her love of rainbows, sparkles, and high energy. She is definitely a creative spirit—she expresses herself through dancing, art projects, and baking. Her “dream” room would include a built-in art center, a canopy bed with fairy lights, and a hanging chair for her to read.